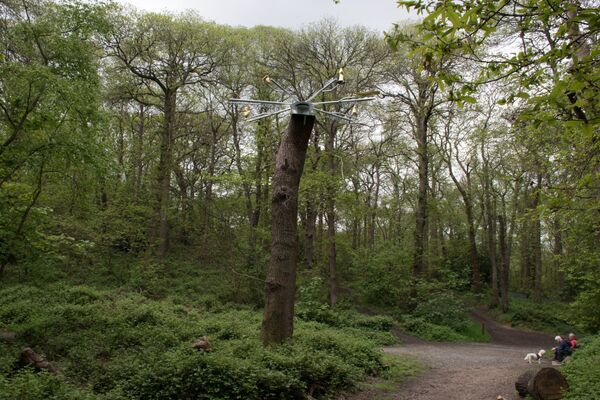 A work commissioned for Lesnes Abbey Woods as Part of Estuary 21.
Lesnes Abbey Wood and the Abbey itself were key sites in the 1381 Great Rebellion, that started in Essex close by to another of our Estuary 2021 sites, Wat Tyler Country Park. A key mustering point for rebels gathering from Kent, these two ancient landscapes of the estuary played central roles in this first known, organised mass protest in the UK.

On an initial research and site visit to the woods, artist Jonathan Wright was struck by a particularly beautiful tree stump, a very tall remaining trunk of an Oak. Its central location in a clearing where numerous pathways converge made it a perfect spot for an artwork to act as a conceptual way marker - pointing to events from the past, present, and future that related to this historic site. It will rotate like a weather vane to connect people with the river, history, people, and ideas.

During the summer of 2020, Jonathan led socially-distanced conversations on site at the woods with nearby communities and visitors to the site to find out who, what and why people would like to have represented as part of the work.

The finished sculpture will feature 3 dimensional objects and/or people who have played a key part in the history of Lesnes Abbey Woods, or who are important to shaping the future. e.g. Abel Kerr and the Great Rebellion of 1381, a fossil or one of the volunteers, key to the successful running of Lesnes.

The work has been commissioned thorugh a partnership of Estuary 2021, Metal and London Borough of Bexley and funded through the kind support of the National Lottery Heritage Fund. 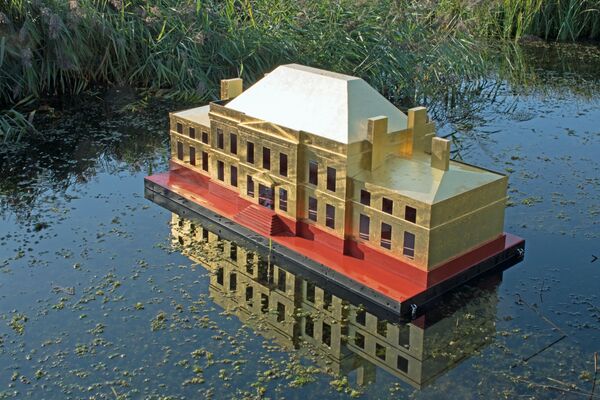 The paradox created by the Wildfowl and Wetlands Trust is that the London Wetland Centre is a fake landscape, contrived and constructed much like a Capability Brown design; a very apposite irony considering the history of the site.

The hidden politics and intrigue played out in the area over the previous 500 years has informed and affected the current political and physical landscape. The view we now see is, in fact, a tapestry, an interwoven, embroidered view made possible by what is now invisible.

An artificial intervention in the landscape is readily consumed by the forces of nature when it is not supported, whereby it quickly disappears from view. It leaves its mark as a trace or an atmosphere. The substance, the physical remains are gone completely. This is the case at Barn Elms.

The area had a significant role in the history of English politics. The site was occupied before the Norman invasion and was home to a medieval manor house that stood until the early 1700s when it was demolished and rebuilt in a contemporary style. There is no trace of the manor house today. A further paradox is that when the site was reclaimed by water as reservoirs it also became a haven for wildlife, preserving the unspoilt nature of the area.

The most significant tenant of the Barn Elms Manor was Jacob Tonson. He brought the Kit-Cat club with its Whig allegiances and political importance to meet there in a re- purposed part of the manor house, a bespoke meeting place.

The commission for Unravelled asks what may be the future significance of such a site as it falls through history. The club with its bawdy, drinking and carousing was also a hot-bed of political and artistic discussion – a place of high blown intellect, a powerful driving force of change and enlightenment.

It is hard to imagine that no physical trace is left at the London Wetland Centre of such a significant movement. Instead the site has been returned to nature; what we now see is a fake landscape, controlled and contrived – artificial in nature – there is the paradox. The ‘artificial’ has obscured the history of the site. The reservoirs were made to supply water for Victorian Londoners. It was always an unnatural body of water.

This raises questions of what constitutes a natural landscape and what it is comprised of.

The commission aims to show the layers of history in the site more clearly, that the humanity and intelligence of the members of the Kit-Cat club still has a role to play in the present day. History is forever being re-written, it is not fixed but continually evolving like moving sands beneath our feet. ...more 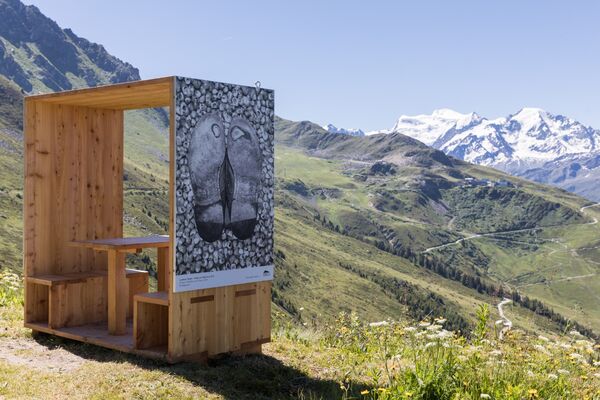 The year 2020 will be long remembered in our history - to what depths and aftermath are still to be determined.

The Verbier 3-D Foundation cancelled its annual artist residency due to the current circumstances, while remaining aware that a great pause can be the perfect landscape for a global reflection.

Rethinking about the Foundation and our work in the future, we wanted to learn from the artists whom with we have worked with in the past.

The Great Pause…
is an impromptu outdoor exhibition featuring image and text-based work from the Foundation's past residency artists who were asked to send in their current reflection of the world we live in NOW.

A world affected by the global pandemic of the Coronavirus.

The exhibition shares the voice of visual artists during this extraordinary time.

The artists' submitted work takes the form of billboards and cabins that are scattered in the outdoor landscape in the Swiss Alps at an altitude of 2300 meters above the town of Verbier.

The 5 km long exhibition can be accessed by foot between La Croix de Coeur and Les Ruinettes and continues into the Verbier 3-D Foundation Sculpture Park. 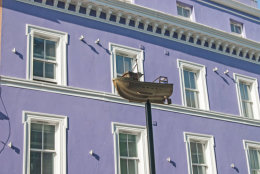 Now part of the Permanent Folkestone Artworks collection.
'Fleet on foot'
Tontine Street is the tidal inlet on which Folkestone as a fishing village developed. The fleet consisted of seven boats when it was nominated a tributary ‘cinque port’ to Dover in 1299. The artist’s research into the history of the river Pent, now beneath Tontine Street, has led him to celebrate the seven boats currently licensed in Folkestone Harbour, and three licensed elsewhere but operating from Folkestone. Gilded replicas (3D printed) of these boats surmount poles that carry information about each boat, its captain and crew, and other references too, such as Plimsoll markings, found on shipping all over the world (Samuel Plimsoll died in Folkestone in 1898).