The paradox created by the Wildfowl and Wetlands Trust is that the London Wetland Centre is a fake landscape, contrived and constructed much like a Capability Brown design; a very apposite irony considering the history of the site.

The hidden politics and intrigue played out in the area over the previous 500 years has informed and affected the current political and physical landscape. The view we now see is, in fact, a tapestry, an interwoven, embroidered view made possible by what is now invisible.

An artificial intervention in the landscape is readily consumed by the forces of nature when it is not supported, whereby it quickly disappears from view. It leaves its mark as a trace or an atmosphere. The substance, the physical remains are gone completely. This is the case at Barn Elms.

The area had a significant role in the history of English politics. The site was occupied before the Norman invasion and was home to a medieval manor house that stood until the early 1700s when it was demolished and rebuilt in a contemporary style. There is no trace of the manor house today. A further paradox is that when the site was reclaimed by water as reservoirs it also became a haven for wildlife, preserving the unspoilt nature of the area.

The most significant tenant of the Barn Elms Manor was Jacob Tonson. He brought the Kit-Cat club with its Whig allegiances and political importance to meet there in a re- purposed part of the manor house, a bespoke meeting place.

The commission for Unravelled asks what may be the future significance of such a site as it falls through history. The club with its bawdy, drinking and carousing was also a hot-bed of political and artistic discussion – a place of high blown intellect, a powerful driving force of change and enlightenment.

It is hard to imagine that no physical trace is left at the London Wetland Centre of such a significant movement. Instead the site has been returned to nature; what we now see is a fake landscape, controlled and contrived – artificial in nature – there is the paradox. The ‘artificial’ has obscured the history of the site. The reservoirs were made to supply water for Victorian Londoners. It was always an unnatural body of water.

This raises questions of what constitutes a natural landscape and what it is comprised of.

The commission aims to show the layers of history in the site more clearly, that the humanity and intelligence of the members of the Kit-Cat club still has a role to play in the present day. History is forever being re-written, it is not fixed but continually evolving like moving sands beneath our feet.
18/10/2020 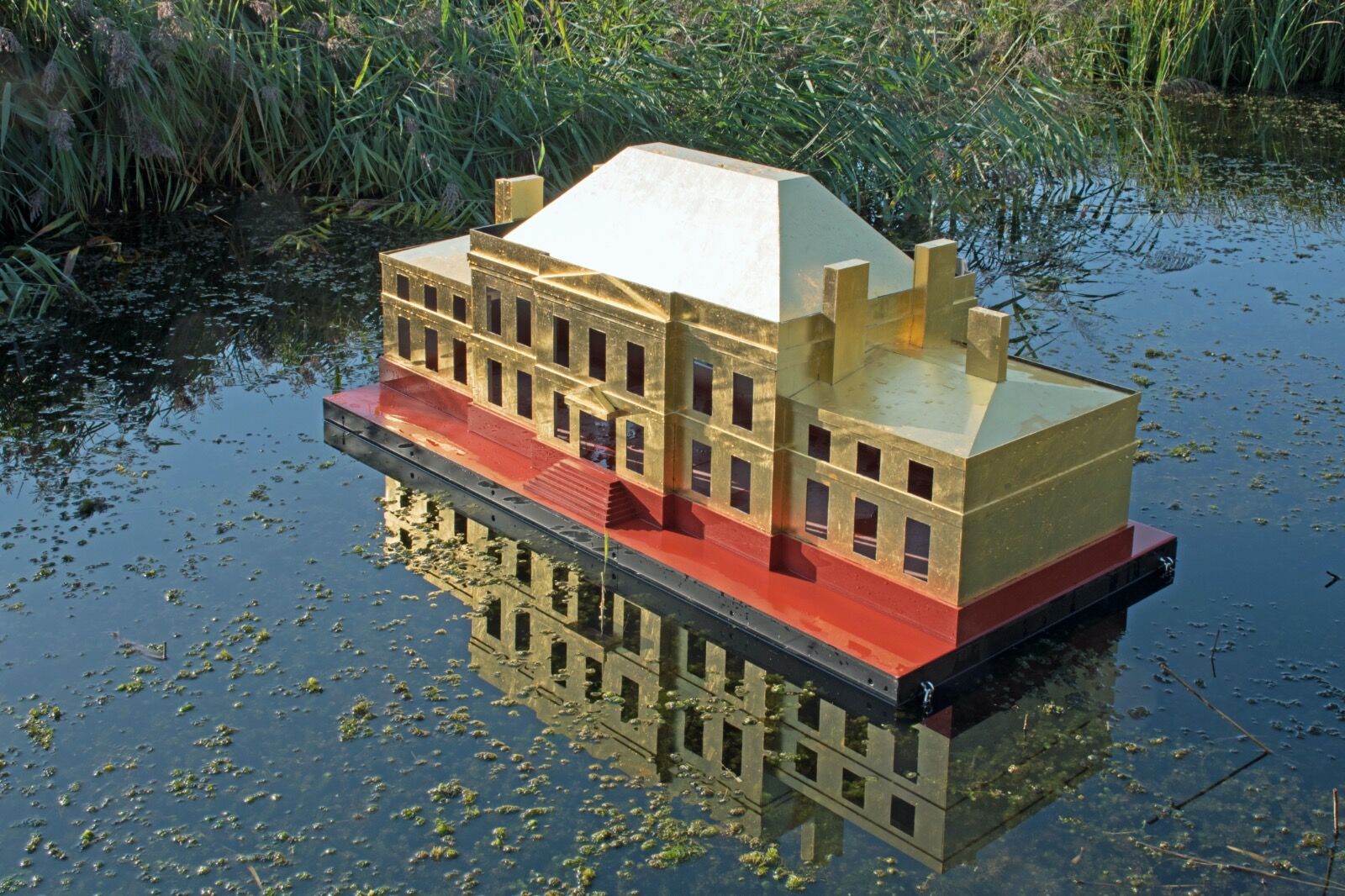 'Golden Manor House'
WWT London Wetland Centre is delighted to announce Wetlands Unravelled, a year long contemporary art programme woven throughout the lakes, ponds and grasslands of one of the capital’s largest wild wetlands. Curated by Unravelled, who commission and produce site-specific projects inspired by history and place, the programme unfolds over three seasons with new sculptural, installation, video and textile works by ten artists exploring the paradoxes of conservation within the wetlands environment.
Artists Tania Kovats, Anne Deeming, Jonathan Wright, Gavin Osborn and Alec Stevens launch Wetlands Unravelled in March 2020 at London Wetland Centre, followed by Lizzie Cannon in the summer in parallel to a programme of performances, talks and events, and Claire Barber, Sharon McElroy, Eloise Moody and Caitlin Heffernan in the autumn. The new commissions respond to the topography, wildlife, history and politics of the wetland environment, during the twentieth anniversary year of London Wetland Centre.
Next
Previous